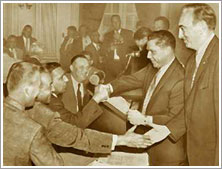 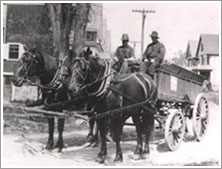 For more than a century, the Teamsters Union has helped millions of workers achieve the American Dream. Our success is a testament to those who came before us, who stood together to form a union and a labor movement. These workers fought for the rights and privileges that today most Americans take for granted. Without the solidarity of unions, there would be no weekends, no pensions and no health insurance.The best way to celebrate Teamster History is to highlight the actions and events that improved working and living standards for American families and communities.

Learning about the struggles and victories of the past will help union leaders, members and nonmembers alike appreciate the contributions Teamsters made not only to labor history but to American history.The founding members of the union foresaw the growth and promise of the Teamsters as a model for workers everywhere. And they developed a philosophy that is as true and vital today as it was in 1903:

“Let each member do his duty as he sees fit. Let each put his shoulder to the wheel and work together to bring about better results. Let no member sow seeds of discord within our ranks, and let our enemies see that the Teamsters of this country are determined to get their just rewards and to make their organization as it should be — one of the largest and strongest trade unions in the country now and beyond.”

The stories, photos, audio recordings and videos that follow are not half-forgotten mementos of past glory days. They memorialize the marches, strikes, tears and victories of the past, but they also form a foundation of tradition, strength and pride upon which we build our future.